Van der Valk recently delivered the 26-metre Forum to her delighted owner. This Raised Pilothouse yacht was designed by Guido de Groot, and boasts a unique interior devised by the owner’s own interior architect in partnership with our in-house interior department. Built for sailing principally in the Baltic Sea, she features a mast that lowers hydraulically to keep her clearance below six metres, as well as a very large flybridge designed specially for entertainment.

A SERIES OF ACHIEVEMENTS

Forum sports a V-drive propulsion system with twin MTU 10V 2000 M93 engines of 1502 hp each, which can deploy a substantial maximum and cruising speed of 23 and 18 knots, respectively. She also has twin 26-kilowatt generators and a Najad hydraulic fin stabilization system.

Contributing to what has already been a busy 50th jubilee year for Van der Valk, the launch of Forum adds to a series of achievements that has already included the 23-metre Flybridge Valencia and the inspiring Anemeli. Our order portfolio remains well-filled: the first new BeachClub, slated for delivery later in 2017, is especially keenly anticipated. Keep your eyes peeled for updates. 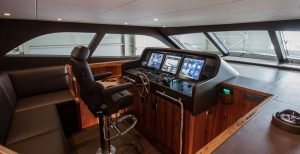 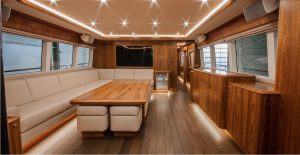